Human-eating monsters, a messy love triangle, supernatural high school students, and a murder mystery filled with many twists and turns are all packed into the first, eight-episode season of “Wednesday” on Netflix. “Wednesday” focuses on the titular Wednesday Addams (from the famous 1964 Addams Family sitcom), a pigtail-wearing, deadpan, morbid teenager who gets sent to a boarding school for outcasts after she gets expelled from her previous school for her wrongdoings (mainly dropping a bag of piranhas in a pool full of students playing water polo). At Wednesday’s new boarding school, Nevermore, she meets many odd and eccentric characters including her roommate Enid, an enthusiastic fun-loving werewolf; Bianca, the it-girl of Nevermore who gets on Wednesday’s bad side early on; Xavier, a troubled artist, Bianca’s ex-boyfriend, and one of Wednesday’s love interests; and Tyler, a non-outcast who Wednesday meets at a coffee shop, and who becomes another one of Wednesday’s love interests. Along with many more peculiar characters, “Wednesday” never has a dull moment.

Some of my favorite episodes include:

Episode 4: “Woe What a Night” – In this episode, Wednesday’s investigation of the recent murders around town is interrupted when she is encouraged to go to the school dance dubbed: the Rave’N by her pet/family member named Thing (who happens to be a sentient hand). The highlight of this episode is Wednesday’s dance break, where the audience gets to see a less rigid version of Wednesday. Jenna Ortega, the actress who plays Wednesday, choreographed this dance herself, and was praised by her cast members for both the originality and how well the dance fit the character of Wednesday. The dance scene has now been turned into a meme.

Episode 7: “If You Don’t Woe Me by Now” –  This is no doubt my favorite episode of the season. In this episode, Uncle Fester, Wednesday’s eccentric, kleptomaniac uncle, visits Nevermore in an attempt to help her with the murder investigation. As a long-time fan of The Addams Family movies, Uncle Fester has always been my favorite character. Fred Armisen’s performance as Uncle Fester on “Wednesday” did not disappoint. Uncle Fester’s goofy attitude came through beautifully. The highlight of this episode is the dramatic scene in which Thing is almost murdered, and Uncle Fester narrowly saves his life with his electric shock powers.

Episode 8: “A Murder of Woes” – The last episode of the season is of course the most action-packed of them all. Once Wednesday uncovers who the murderer is after being thrown off the scent multiple times, she is kidnapped and nearly killed by the spirit of a racist, psychopathic pilgrim who wishes to destroy all outcasts. Luckily, her friends, including Bianca (who has warmed up to Wednesday’s cold attitude) help to get all of the students in Nevermore to safety and help Wednesday defeat the psychotic pilgrim to save the school. Although the season seems to end happily, Wednesday promises much more mischief and disaster in one of the last scenes of the season.

One of my favorite aspects about “Wednesday” is the way the writers were true to the source material (The Addams Family sitcom, comics, and movies) while also adding a few new modern aspects. It warmed my heart to see Christina Ricci, who played Wednesday Addams in the Addams Family Movies in the 90s, be included in the “Wednesday” series as the character: Miss Thornhill. “Wednesday” gives Addams Family fans a fresh revamp of the iconic creepy family and gives new fans a reason to watch the classic “Addams Family” sitcom, movies and cartoons. 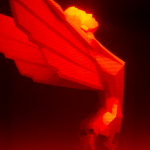