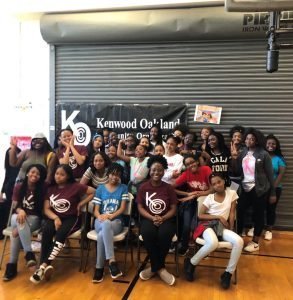 During the continuation of the #WeWalkForHer series, the Girls Lead 2019 Conference included a panel with State Senate member Patricia Van Pelt, Rev. Robin Hood, Kayla Chavers, and Sernetrica Williams. The Conference also included six workshops: entrepreneurship, self defense, digital footprint, civic engagement, DNA Backlog, and restorative justice, and much more. While I attended the Entrepreneur workshop, speaker Nicole Patterson, owner of Iris Botanicals, informed us that entrepreneurs can take a stand against inaction regarding missing Black girls by using their platform to promote awareness. My favorite chant was “Stop and listen, our girls are missing!” 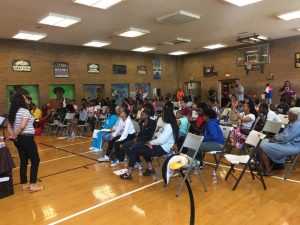 Last year, after her march for missing Black girls, Roberts told True Star that the next time Black women got together, she wanted it to be centered around positivity. She stayed true to her word. KOCO worked hard to ensure the day was just that–positive. When I left, I felt as if I had just attended an empowering church service. The youth within the organization stepped up to make the event a success. “The adults don’t help us out,” Roberts said. “They say that if we depend on them now, we will always depend on them.”

Roberts receives a lot of attention for her work, but she likes to remain humble. “I really don’t look at it as a big thing,” she said. “I don’t want to get big headed.” Although Roberts is wise beyond her years, the 14-year-old rising freshman at Dyett High School For The Arts, still enjoys her childhood as much as possible.

Keep doing what you do, Aziy Roberts and KOCO. We’re rooting for you!