Beyoncé leads with nine Grammy nominations for her latest studio album “Renaissance.” This brings the Queen Bey to a whopping 88 total Grammy nominations in her career, tying with her husband Jay-Z, for the most Grammy noms of all time, according to NPR.

Runners up for the most nominations for the 2023 Grammys include Kendrick Lamar with eight nominations and Adele and Brandi Carlile with seven each.

Other popular nominees include Harry Styles, Future, Latto, Muni Long and more. But one of the most competitive categories of the night will be for Record of the Year. The heavy hitters going head to head include Beyoncé (“Break My Soul”), Adele (“Easy On Me”), Mary J. Blige (“Good Morning Gorgeous”), Lizzo (“About Damn Time”), Kendrick Lamar (“The Heart Part 5”) and Harry Styles (“As It Was”). The same talented artists will be competing against each other for Album of the Year bragging rights too.

The awards show has even created new categories for next year’s awards: Songwriter of the Year (Non-Classical) and Best score Soundtrack For Video Games And Other Interactive Media, according to the Grammy Awards.

We’re looking forward to seeing who wins for the different categories! Good luck to all the nominees! 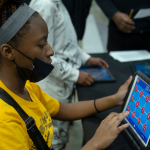