I know many of you have a love for art or love going to art museums. If this is you, check out 19-year-old Chicago creative Lorenz King.

Representing one of the top HBCUs, King is going into his second-year at Morehouse College. Growing up in Chicago, he has been making art for as long as he could remember. He currently has artwork on display in the Museum of Science and Industry. The painting, RIP Jarad Higgins, is a piece that was selected to be a part of the Black Creativity exhibit. The inspiration for the artwork came from his love of Juice Wrld’s Music. After Juice Wrld passed away in December of 2019, it took a toll on the music industry and Higgins’ fans everywhere. Many fans cried and played his music on repeat, but others, like King, decided to express their emotions in the form of art. King used his talent and skills to portray his love and admiration for Juice Wrld’s music and turned it into an outstanding painting.

King doesn’t just work on a canvas. He’s taken his creativity to a whole other level by putting many different designs on people’s shoes. This skill of customizing shoes came from reviving an old pair of Huaraches. He added art so the shoes wouldn’t look so worn out. King decided to share his talent and now customizes other people’s shoes. So if you want trendy graphics on your all-white Air Force 1’s, check him out! Lorenz also applies his creativity toward music. He produces songs and plans to continue that in the future.

We can all agree that King has a true gift when it comes to art, and he doesn’t plan on keeping it to himself. He’s decided to share his knowledge with other people who have the same interest as him. He is working towards mentoring younger kids and sharing techniques and advice that he has learned over the years as a young creative.

You can check out his painting RIP Jarad Higgins at the Black Creativity exhibit until July 5th. You can also visit his Instagram page to see more of his creations. Watch the video below to see the full interview. 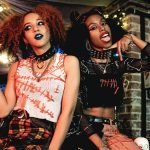