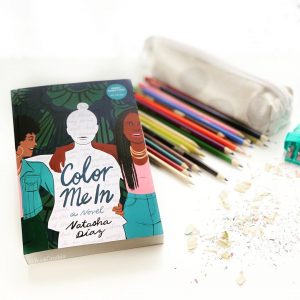 “We all make assumptions about each other. It doesn’t matter if you’re family or a stranger on the subway; we do it everywhere, even here, in our safe spaces, where we’re supposed to love each other up and down.”

With straight brown hair and pale skin, no one realizes 16-year-old Nevaeh is half Black. She’s not popular at her White New York prep school and with her Black fam, she sticks out like a sore thumb. So where does she fit in? When her dad (White, Jewish, and filthy rich) is caught cheating on her mom, Nevaeh moves in with her family in the city with her grandpa, aunt, and two very opinionated teen twin cousins, causing Nevaeh to confront her biracial heritage and her privilege for the first time.

Color Me In by Natasha Diaz surprised me so so so much! I went into it excited because I thought it would just be about a biracial girl coming of age. Honestly, it was so much more than that! Nevaeh struggles to figure out who she is throughout this book, but there’s much more to her story. Her mom is grief-stricken from the divorce. She’s got a really special and borderline psychic connection to her best friend Stevie– who is also biracial (White and Asian) and a super cool dancer–and she’s secretly an incredible writer but no one knows. I loved the parts of the book where Nevaeh would just bust out with poetry to explain her feelings. The writing was so lyrical at times, but also still really chill, with LOTS of funny dialogue that made me smile. And yes, the bits about race and coming of age were really spot on. Nevaeh has to confront her privilege and how to use it. She makes mistakes, but it was dope to watch her learn from them. And don’t even get me STARTED on the romance! She totally falls for Jesus, a Afrolatinx kid in her Harlem neighborhood, and their relationship gave me all of the feels. Even on top of all of this–her parents’ divorce, her race and religious struggles, her bestie, “boyfriend,” and poetry–Nevaeh still has something else going on. The prettiest and most popular girl in school hates her.

Diaz gives us a refreshingly real story about growing up, especially in a New York setting. I found myself relating so much to this story as someone who is both biracial and a New Yorker. It pulled at my heart to watch Nevaeh learn how to love, how to be a good friend, how to be who she is, and to learn about how the world sees her.

*I didn’t like the way fat characters were described.

Other than those things, I dig this story and will be (1) buying it and (2) reading it again and again. The release date is scheduled for August 2019.