Netflix recently released on its platform a Jeffrey Dahmer series starring Evan Peters, Emmy-winner and leading star in “American Horror Story,” who portrays the famous serial killer. As a fan of “Law & Order: SVU” and crime documentaries, the news of Peters portraying this role had me incredibly intrigued. As someone that’s watched his acting presence on the hit series “American Horror Story,” I knew that he was capable of portraying this infamous sick individual. Nicey Nash, who plays a concerned neighbor and suspects Dahmer of killing, has received positive praise regarding her performance in the series.

Monster: The Jeffrey Dahmer Story has received mixed reviews from fans and critics; some who believe they did a justified portrayal of the show and those who don’t believe the wounds of the real life victims families should be reopened. Personally, I have mixed emotions on the reviews. As someone that personally loves mystery and real life case stories, watching the series was a bit unsettling to realize that this truly happened to young men and boys in real life–one as young as 14 and even one that was deaf. Further into the series that depicted the real cases, my mouth dropped from the horror and possible evil that could be within someone’s soul.

Sveva Wells, 20, has not yet seen the series but believes that the makings of serial killer shows or films may be beneficial. “I have not watched the series yet. As a psychology major, I appreciate the Dahmer film portraying the mind inside a serial killer, but I don’t think films should be made because it is also promoting people to give into those dark desires.”

Often times series or shows that depict serial killers are more focused on the entertainment value without handling it with delicate care due to the severity of the outcomes. Kiana Govia, 24, appreciates the entertainment value of Monster: The Jeffrey Dahmer Story and says that it maintained her engagement with the series. “I believe movie editions of killer documentaries are a great way to depict horrific events in an entertaining way. Personally, the movie editions maintain my attention and interest longer than original documentaries.”

Elijah Strohmann, 19, has expressed his concern for the continued making of serial killer series or documentaries with entertainment value. Additionally, these film makings could spark inspiration into another sick individual. “I don’t think that shows should be created about serial killers. Bringing it to the forefront of society can make it feel more acceptable and there is the chance it could come about more frequently,” he said. “I think that shows like this can reopen wounds, however, I think the real problem comes in with normalizing it in entertainment.”

Despite the concerns of famous serial killer series or documentaries reopening the potential wounds of its victims’ families, some viewers appreciate that networks aren’t hiding the evil realities of our world.

Govia, appreciates that Netflix accurately portrayed the story of Dahmer and its victims with care. “I believe the show portrays Jeff  as a lost soul who was searching for love or companionship in all the wrong places. Jeff craved for his victims to stay, crying that everyone leaves him,” she said. “There may be minor exaggerations for theatrics within the show but I strongly believe the basis or foundation of Jeff’s criminal behavior was held true within the show.”

Personally, I thought Monster: The Jeffrey Dahmer Story was portrayed maturely. However, I can’t stop thinking about the real life victims’ families who are traumatized by another show or series being made at the expense of their loved ones. These were real life events that happened and often viewers forget that gruesome fact. Hopefully, the victims’ families have found peace and will receive some compensation from networks or companies reopening these horrific events that took place. 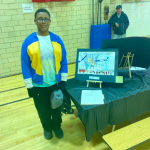