The queen of acting will bless us with her presence in two highly anticipated upcoming movies – The Woman King and Hunger Games: The Ballad of Songbirds and Snakes. The news has been officially released that Davis will have a leading role in both films and fans are beyond excitement with the announcement.

The Woman King is a film that definitely fits the persona of Davis: very confident and alluring with the strength of an independent woman. The poster release has Davis pictured with a sword in her raising arm, red and orange smoke clouds clearing her path as she seemingly prepares for battle, and has a look of determination for what lies ahead of her journey. The tagline on the poster isf “Her Reign Begins”. An interesting fact about this film is that Davis not only had combat training for the role, but she also got her DNA tested to help tap into and exceed the performance level for her training.

Davis and her warrior co-stars endured intense training in preparation for the role that consisted of strength training, sprinting, weightlifting, and further high intensity workouts to give them the warrior regime they needed to portray. Additionally, each actress received two hours of weapon training with professional stunt coordinators. Gabriela Mclain, cast trainer and nutritionist, took the whole cast for DNA testing like she did with Davis.

Another interesting fact about The Woman King is that the film is based on real life events. According to vanityfair.com, the movie “tells the story of the Agojie (also known as Amazons), a real-life army of women warriors who defended the powerful West African kingdom of Dahomey in present-day Benin during the 17th, 18th, and 19th centuries.” The Woman King centers on General Nanisca (Davis) and her military regime. Audiences have taken to social media to appreciate the value of the roles that Davis, a producer of this movie, chooses which often introduces fans to history that they never knew.

Hunger Games fans have gone into a frenzy regarding Davis’ official commitment to the upcoming movie in the franchise. The Oscar-winning actress will star as the villain in the Hunger Games prequel The Ballad of Songbirds and Snakes. Her character, Dr. Volumnia Gaul, is the head gamemaker of the 10th annual Hunger Games. According to thehollywoodreporter.com, “The prequel’s synopsis reads: ‘Years before he would become the tyrannical President of Panem, 18-year-old Coriolanus Snow is the last hope for his fading lineage, a once-proud family that has fallen from grace in a post-war Capitol. With the 10th annual Hunger Games fast approaching, the young Snow is alarmed when he is assigned to mentor Lucy Gray Baird, the girl tribute from impoverished District 12. But, after Lucy Gray commands all of Panem’s attention by defiantly singing during the reaping ceremony, Snow thinks he might be able to turn the odds in their favor. Uniting their instincts for showmanship and newfound political savvy, Snow and Lucy’s race against time to survive will ultimately reveal who is a songbird and a snake.'”

I love that the filmmakers of the prequel of the Hunger Games had already envisioned Davis for the role before she was officially casted. As fans and audiences have previously experienced Davis as a villain in different roles, it’s expected that she won’t disappoint in this upcoming movie at all.

The Woman King is scheduled to debut in theaters on September 16th. The Ballad of Songbirds and Snakes is slated to premiere in theaters November 17, 2023. 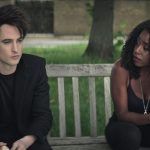