As expected, Day Two of the Chicago Elite Classic exceeded expectations convincingly. Throughout the entire day, from 10:30 am to 11:30 pm, fans were able to watch some great basketball from some of the best high school teams in the country.

It was a long day at the Credit One Arena yesterday. But, it was a special one as well. Chicago’s teams were on a mission to prove they were the basketball mecca of the world. Nearly every Chicago team took home a win at the tournament, and there were impressive performances from many.

Right around 1:30 pm, the two prep schools Chaminade and St. Ignatius were up, and they were, to say the least, underwhelming. Throughout the entire game, neither team could get anything to fall, which unfortunately meant both teams shot below 40 percent from the field. On the stat sheet, both teams were nearly identical. But, with a double-double from Chaminade’s Jo-Nivilan Daniels (15 pts/13 rebs), the prep team from Missouri was able to secure a win at the tournament.

Next up were Vashon and North Lawndale. If you are a basketball fan who loves to watch a tight, gritty game, this one was for you. Both teams were ready to play and the energy in the arena just felt different. The game came down to the wire with neither team waiting for the other to make a mistake. During the last 15 seconds, North Lawndale had a chance to take the lead and likely win. But, an unfortunate turnover would prove to be the end for the Phoenix, and with Vashon’s stellar shooting performance from the line, they held on to win.

The stage was set for St. Rita/Thorton. With Thorton’s Ty Rodgers (#1 in Illinois and #53 in the Nation) and St. Rita’s Morez Johnson, it was bound to be a memorable clash between the two. To everyone’s surprise, neither of the stars had the best game; it was Thorton junior Vincent Rainey who stole the show, collecting 19 points off the bench to lead Thorton to a 60-51 victory.

By far the best performance from any Chicago team during the entire tournament was when Kenwood annihilated Evangel Christian, blowing them out of the water, 80-39. Big-time performances came from many on the Kenwood side as four players ended in the double digits. But, the true star of the night was junior Darrin Ames, who finished the game scoring more points than any other player during the tournament–30. Also, he shot an absurd 77 percent from beyond the arc, 7-9.

Probably the most anticipated game of the night was Mater Dei versus Simeon. Simeon came out firing on all cylinders to take a quick 20-6 lead in the first half. Mater fought hard but, with a dominant third-quarter run from the Wolverines, they were able to play keep-away in the fourth and secure a 64-50 win, preventing the Californians from leaving Chicago with a victory.

After the game, Simeon players Miles and Wesley Rubin (recent transfers from Homewood-Flossmoor) spoke on Kenwood’s “King of Chicago” comments. “We’re gonna see what’s gonna happen when we play them January 11th.” Miles continued, “I feel like we’re the best in the state so, yeah.”

The finale was a bit underwhelming, to say the least, since Whitney Young suffered a loss to the team from DC, Gonzaga. The No. 2 ranked team in the Chicago area just didn’t look like themselves, as they accumulated an embarrassing 19 turnovers. A worldy performance from Xavier Amos (28 pts/2 stls) looked good but didn’t feel good as the Dolphins fell, 64-50.

Devin Dinkins from Gonzaga put on a show in Chicago, scoring a team-high 18 points and dishing out team-high assists. After the game, Dinkins was asked how special it was to him to play in the Chicago Elite Classic. “I really loved playing in this tournament in Chicago,” he said. “Plus, this was my first time in Chicago so, I got to see all the tall buildings and stuff. I really liked experiencing Chicago.”

Be sure to check back here next year for the 2022 recap of the Chicago Elite Games. 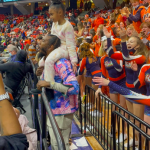 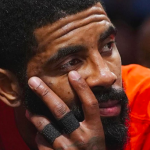