I love that Nicki Minaj did the Barbie thing, the Mom thing, and now she’s definitely not stopping with dropping hit singles or albums. As a “Barb” that’s been a fan of her music for years, I love that she advocates for women that can do it all and still be successful. So, what’s the latest news for the Queen of Rap? She’s been teasing her new single “Freaky Girl” to drop sometime soon.

After the Queen shared a snippet teaser of her new upcoming track, fans have speculated when the official release will be and if they can somehow find a leaked track anywhere. I’ve never agreed with the process of certain fans or audiences wanting to find the leaked track or album of an artist because it takes away from the creative vision as well as it could be completely inaccurate by the time it debuts. So, I’ve always tried to remain patient for whatever Barbie drops.

The teaser of “Freaky Girl” that Minaj shared on her social media showed her dancing and twerking while the song played in the background of her video. Fans have become more excited over the single due to it being cleared to sample Rick James’ 1981 classic hit, “Super Freak”. According to musictimes.com, “Despite the song still kept on Nicki’s shelf, ‘Super Freak’ gained a massive resurgence on Itunes R&B/Soul charts – from 0 to No. 171 to No. 45 in the past three days since the ‘Freaky Girl’ snippet.” The power of Minaj’s influence and her fan base proves time and time again that she’s truly an icon.

Although Minaj has not yet disclosed or announced when the release date will be of this highly anticipated single, fans have noticed that if you Shazam the snippet of the song, a preview of the title displays on the platform. Therefore, this definitely gives speculation that it may be arriving sooner than we think. Hopefully, this is the perfect single to end our summer and bring us into the upcoming fall. Maybe this single will be as great as her 2014 “Anaconda” that took everyone in a chokehold–in a great way, of course. 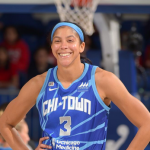