Last night Kelly Rowland joined Future on stage for their first performance of the rapper’s new single “Neva End”, on Jimmy Kimmel Live. The song can currently be found on the re-release of Future’s debut album Pluto, Pluto 3D. In addition to songs included on the original album its re-release will include three new songs and two remixes. 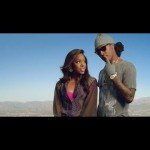