This July heat is no joke. In fact it’s down right dangerous.

The United Kingdom is currently going through its most brutal heat wave on record. On July 19th, they got hit with temperatures as high as 104 degrees Fahrenheit, which is insane for the UK. A normal July summer day is typically reported to be in the low to mid 70s. But, most of you reading this probably live in Chicago, so why should you care about some heat wave halfway around the world?

Well, Stephen Belcher, the chief scientist for the Met Office, stated that the country’s insanely high temperatures would be basically impossible without some man-made factor from climate change. He went on to say that Britain could see weather like that every three years without some sort of intervention on carbon emissions.

It’s not just making everyone uncomfortable, either. No one has AC since they’re used to lots of rain and cooler weather. Imagine having to sit in your house, school, or workplace through a Chicago summer without any cooling. Roads, railways, and runways have also been closed due to damages from the heat. Fires erupted in a few places, and the government issued a warning that even the healthiest of people could die from the temperatures.

The heat isn’t just affecting the UK, either. There have been fires and deaths in France, Spain, Portugal, Greece, and the Balkans. At least six people drowned from trying to cool off in rivers, and even died from heat strokes. Tens of thousands of people have had to move out of their homes since the fires, and the UN warns that this is just the beginning. We’re beginning to see climate change make huge, catastrophic weather events.

The heat wave has many people speculating that President Biden will issue a national climate emergency declaration. According to the Associated Press, this declaration would allow Biden to redirect spending to accelerate renewable energy such as wind and solar power and speed the nation’s transition away from fossil fuels such as coal, oil and natural gas

Luckily, it seems like the extreme weather is dying down for now in some parts of the world, but it’s not going to stop in Europe. There’s nothing preventing Chicago from seeing the same kind of consequences unless we do something about the climate crisis sooner than later. 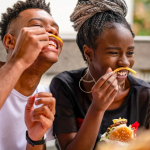