Drum roll please… *Dramatic pause* It’s EVE! Of course the pic above isn’t her though.

Word on the street is Eve is pregnant by her British boyfriend Maximillion Cooper, with her first child and his fifth. WHOA THERE!

Fifth child? Well… anyways, Congrats to her. She doesn’t seem to be as crazy as most celebs so she may be a great mother. 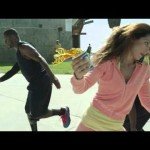