There were two teams, the Red Team and the Black Team. Both teams were loaded with former NBA players, current college players, and streetball legends straight from the streets of Chicago.

Since his playing days, Cox has given back to his community in several ways. He has driven around Chicago to give shoes to the homeless, started foundations, and held neighborly events like his once-a-year basketball game.

Besides the many reasons he invented the charity basketball game, the primary goal was to honor his good friend in the Chicago basketball community–Sterling Tate. “He always supported me and was just a great dude,” said Cox. “This game is something I really felt like I wanted to do in tribute to him because he always supported me, so that’s the message, and I’m sitting on that message tonight.”

Cox credits his mother, Karla Cox-Naptali, for being the person who pushed him to give back to the community after his playing days were over. She recalled memories of the ways she helped support her son during his days at Austin Polytechnical Academy High School. “He’s always been an athlete. My favorite memory of Brandon was when he was at Austin in high school. He was really learning how to manage his size. He was complaining about a lot of body aches. I remember I always associated him with Shaq. I always told him, you know what? Hold your hands out, guard your house!”

The game went on, and the score stayed close throughout the entire night, extending to not one but two overtimes. In the end, the Red Team came out victorious with a winning score of 51-47.

Former University of Illinois star Kiwane Garris finished the game with 16 points. When asked what he brought to the court that tonight, Garris said, “Man, I got 20-plus years of basketball, I played in the NBA, I played at the University of Illinois where I’m the second all-time leading scorer. With all that experience, playing overseas, playing in the NBA, that’s all I took out there on the court.”

Former Ore High School basketball player Shelly Moore finished with 12 points. He was excited about playing in the charity game but his whole mood changed when asked about his daughter. Moore said, “She means a lot to me. She basically is like my motivation. I’m trying to have her to be my support around basketball.”

The game was filled with positive energy, and everyone had a great time. Brandon Cox and his BLC Live Life Cancer Foundation put on a successful, wholesome event with ample entertainment while completing the mission of paying tribute the late, great, Stearl the Pearl. 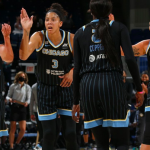 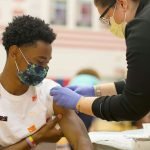