Recently, TrueStar got a chance to speak to Ray Lavender about his new music, his love life, his younger years, and more. It’s been a while since we’ve seen the R&B singer but he’s back with his new single “We Love.” So, what is the inspiration behind this love song?

“Just being in that place. I write about all true stories, they come from my life. Just being in love and going through the ups and downs of love. No relationship is perfect but a lot of people don’t stay together and I’m pro fighting to stay together when you’re in love…. This record right here just hit so hard and it’s heartfelt. A lot of people are going through this, so I thought I would share it with the world and it stuck. It was a good look.”

Speaking of relationships, you may have seen Ray Lavender on the reality show “The Ultimate Merger” where he won the heart of Omarosa. So, what’s the status of their relationship today?

“After the show, we’re apart. I live in Atlanta, she stayed in LA. You choose if you wanna be with somebody, you make an effort. We didn’t make the effort to do it. She ended up with Michael Clarke Duncan. So, it all worked out. We still cool, but it was a show we did. I wouldn’t take it back for the world.”

Although it didn’t work out with Omarosa, Ray has always had a way with the ladies. “When I was in high school I used to do this thing, and all the girls sat at my table and all the guys would sit at the other table and just look at my table full of girls and full of women teachers. I would sit there and sing R. Kelly melodies until the bell rang. They knew to sit at my table because they knew [I] was about to sing R. Kelly records and I went in. I mean everyday.”

The “Put It Down” singer says he is now single and focusing on his music. The album has no set date, but there are many talents featured on it. “We got Tank, T-Pain, Teddy Riley, and I went back and got my boys Akon and 2 Chainz and that’s it.”

Working with a lot of big names in the industry Ray gives advice on how teens who want to be entertainers can get where he is. “Just to keep going. Just to don’t give up on your craft. Keep your face out there. Take your CD with your best songs on there and showcase your talents. You got a lot of great guys out here making great songs in their basement and their studio and they’re scared to let people hear their records because they think [people are going to] steal them. Well, my advice is, nothing is kept. You hold nothing because records get dated everyday. You do records until you can’t do them no more. And showcase your talent. Get out here and campaign like the president and it will happen.”

Ray ended the interview with a thank you to his fans, he loves his mom, and follow him on Twitter @DAREALRAYL, and he’s on Instagram: Ray Lavender.

With that being said, make sure you check out Ray Lavender’s new song “We Love” and other songs from the new album.

Also, be looking out for the album release date. Thank you to Ray Lavender for speaking with TrueStar. It was a pleasure. 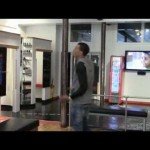