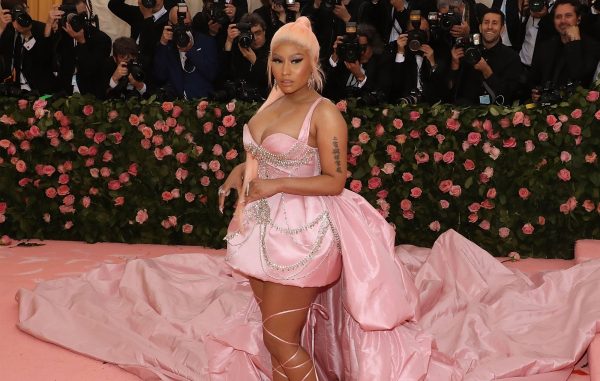 Following a three month break from the public eye and social media, Nicki Minaj dropped her first solo single “Megatron” since the release of her album, Queen in 2018. The music video that has reached over 17 million views, features her boyfriend, Kenneth “Zoo” Petty, in a tropical setting with dance-hall vibes representing her Trinidadian culture.

Nicki’s song of the summer is named after a character from the Transformers franchise, “Megatron,” but the name wasn’t just used for a catchy title. “Megatron” is a villainous robotic alien, leader of the “Decepticons,” and the enemy of Optimus Prime.

They call me Megatron, shorty’s a mega con

It ain’t about the race either, it’s the marathon

Over her 14-year career in the music industry, Nicki has been in quite a few feuds. Here’s a rundown of the most popular feuds involving Nicki and other celebrities:

At the 2015 MTV VMA’s, Nicki read Miley Cyrus to filth after learning that Miley said that Nicki wasn’t “polite” or “kind” in a New York Times interview. Yes, this was the time when our good sis Miley wanted to experiment with hip-hop and appropriate Black culture, and can I just say that she flopped! Anyways, Nicki walked up to the stage to receive the award for best hip-hop video (AS SHE SHOULD) and said what she had to say. “Now, back to this b**** that had a lot to say about me the other day in the press. Miley, what’s good?”

There hasn’t been a word shared from those two since then, until Miley decides to make “Cattitude” featuring RuPaul. In the new song, Miley says, “I love you Nicki, but I listen to Cardi.”

Nicki called Miley out again, this time on her Queen Radio show saying, “Perdue chickens can never talk sh*t about queens. But I do notice a lot of Perdue chickens have been trying to say the queen’s name for clout. And that’s always been happening. And that’s what (Cyrus) did in the first place.”

So, the drama continues.

Believe it or not, this beef started way back in 2007 when Nicki dropped “Dirty Money” on her Playtime Is Over mixtape. In the freestyle, Nicki disses Remy Ma, who at the time, thought she owned the Queen of Rap title. Somebody had to let her know and Nicki said she was thee one! “Tell that b**** with the crown to run it like Chris Brown,” Nicki rapped. In 2017, Remy dropped a seven-minute diss track titled “Shether” where she calls out Nicki for getting plastic surgery. Nicki, the REAL Queen of Rap posted a video online of our Queen Beyonce saying that she was indeed the Queen of Rap and then dropped “No Frauds.” The beef abruptly ended when BET made the mistake of awarding Remy Ma with the best female hip-hop award at the 2017 awards show.

In 2017, Nicki allegedly liked a comment that exposed Cardi’s developing, but lackluster rapping skills. Although Nicki denied all accusations, the public paid close attention when Cardi joined Remy Ma at Hot 97’s Summer Jam stage during Nicki’s beef with Remy in 2017. Meanwhile, Nicki hopped on a track with Cardi B’s husband Offset. Despite mutual appreciation for each other’s accomplishments and the praise that Nicki gave Cardi when “Bodak Yellow” reached the Top 100’s, “Motorsport” gave the public exactly what they were looking for… another female rap beef.

The two rappers filmed the video for “Motorsport” on two different days as they both dissed each other on the track. However, Nicki shared in a “Beats 1” interview that Cardi had trouble taking positive criticism. After a couple of months, things seemed to die down, until both were spotted at New York Fashion Week. Apparently, Cardi B was trying to resolve the issue, even though that wasn’t the time, nor the place. Cardi ended up getting a knot on her head from  a reported elbow. Cardi threw a shoe at Nicki and got into a fight with Nicki’s friend, Rah Ali. Cardi went to Instagram to explain what happened, while Nicki gave us a run down on what happened on Queen Radio. Ever since then, both rappers have been in their bag focusing on their own lives and careers.

The media always tries to paint Nicki as the bad guy, just for speaking up and making sure that she gets the recognition that she deserves, but she is no where near evil. “Megatron” might be seen as an evil character, but Nicki gives it a new meaning. With that being said, go stream “Megatron” on all platforms because it slaps!