It’s been a while since we’ve seen J. Holiday. Now he’s back with a new song titled “Sign My Name.” Check it out:

To me, it sounds like a typical J. Holiday song. You would think since he’s been gone for 3 years he would’ve come back hard with something different, but this song just doesn’t show any growth in him or his music. It’s just decent in my opinion. There hasn’t been word on a third album yet, but he is in the studio working on some “new material.” I do hope to see more of him in the future.

What ya’ll think of the new song? Hit or Miss?

Plus, what do ya’ll think of his haircut? Like it? 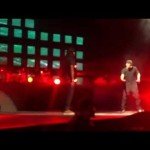