Episode three of Kanye West’s Docuseries, Jeen-yuhs: A Kanye Trilogy, is the weakest one of the trilogy. This episode tells Ye’s story from after the multiple Grammy wins for College Dropout to his failed political campaign, but the majority of it was not a first-hand or inside look for the audience. After the success of College Dropout, the relationship between Kanye and Coodie Simmons, the person filming the documentary, altered. Kanye and Simmons apparently grew apart.

Most of this episode was made up of news clips of the events in Kanye’s life with Simmon’s commentary. There were a few times Simmons was with Kanye filming, but for the most part all the important and nitty gritty details were left out. It was even a moment where he was with Kanye discussing his bipolar disorder and Simmons cut OFF the camera. Why would he do that when we were finally getting never before seen footage of the rapper/producer/entrepreneur speaking profoundly on how he feels about his mental health status, whether he was right or wrong.

The trilogy is still an amazing watch if you’re interested in Kanye’s development from a Chicago beat maker to being one of the top hit makers in the game. As a person who doesn’t really listen to Ye, this was still a good watch for me. I could only imagine a die-hard fan’s watching experience. The first two episodes took us on an amazing journey, but sadly our director could not connect in a personal way at the end of the series. Still, the two directors, Simmons and Chike Ozah, got a cool $30 million for the footage, according to Complex. That’s a bag right there, and I’m happy to hear it for the two men that brought us this amazing trilogy. Catch Jeen-yuhs: A Kanye Trilogy on Netflix now. 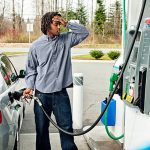