After hearing that Chris Brown had broken up with his ex-girlfriend Karrueche Tran last week, the rumor mill began churning. You would think that Karrueche would be sad and heartbroken over the outcome of their failed relationship but instead she is pictured above to the far right all smiles at a club in West Hollywood. Both her and CB were even invited to a party hosted by Christina Milian over the weekend in which the two co-existed despite their sudden breakup. Meanwhile, Chris was spotted in the picture below with Rihanna, his other ex-girlfriend, sharing a meal together.

What exactly is going on with these two? Are they trying to rekindle an old flame? If so what do you guys think? 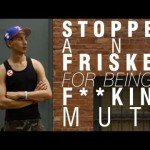 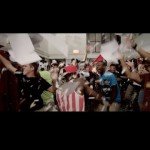