Drake and Chris Brown had an altercation at an NYC club last night, leaving Chris Brown with a gash on his face.

Word is that Drake, Wale, Meek Mill and French Montana showed up at WIP nightclub in New York, where Chris Brown was already present.

The two singer’s crews got into a fight, and bottles were thrown leaving five people injured, however nothing too serious.

Supposedly C. Breezy sent over a bottle to Drake, which Drake rejected, and an argument ensued. This led to fighting, and supposedly Drizzy punched Chris Brown and threw a bottle at him, which left the cut on Breezy’s chin.

TMZ reports that the NYPD were called to the club around 4 or 5 A.M., at which time neither Drake nor Chris Brown were there. No arrests were made.

Following the incident Chris Brown tweeted, “How u party wit rich n**** that hate? Lol… Throwing bottles like girls? #shameonya!,” along with a photo of his face, both of which have since been deleted. 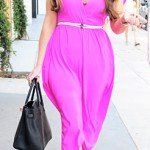