I don’t know about anybody else, but Lil Durk’s proposal has me believing in spending this holiday season with my significant other. Durk gave fans a jaw-dropping surprise at the recent Big Jam concert when he proposed to our girl India Royale. I felt as if I was up there getting proposed to! This beautiful act of love gave me chills, especially after knowing that Durk has come a long way with his crazy baby mama drama.

Cailyn Joyner, a graduate from Thornridge High School, said, “I knew the proposal was going to happen. India is a great mom and wife material, and I’m happy for her!”

I feel as though Durk proposed at the right time, at the right place–in his hometown of Chicago with his biggest supporters. This is a big step for Durk, aka Durk Derrick Banks. We know he is crazy in love with Royale due to the numerous songs about his affection for her. I won’t lie, it felt pretty good to be in front row seats watching one of my favorite rappers propose and being one of the first to post on social media about the proposal while others were at home missing out.

Saadiya Holmes, a senior at South Shore International College Prep, said, “India and Durk’s proposal was a big surprise. I’m happy Durk took that big step. You can see the love they have for each other.”

That said, congrats to our girl India on being a fiancé.  Did we see that ring? After saying yes, Royale continuously repeated, “It’s so heavy. It’s so heavy.” I imagine she wasn’t lying. The ring was iced out. We will be waiting on the upcoming date of the wedding, and I will be rooting for them from the sidelines.

Durk and Royale’s proposal has sparked up the holiday spirit for couples everywhere. Well, for some people. Spencer Ellis, a senior at Lindblom Math and Science Academy,  said,  “Me and my girl are going out tonight. I want her to feel special how Durk did to india.”  Ahnya McKay, a senior at Gwendolyn Brooks College Prep, said, “I want to feel how India felt on the night of Big Jam. My boyfriend is taking me out tomorrow.”

Durk’s proposal has me making my to-do list for the holidays with my significant other.  Did the proposal spark up your holiday season with your boo? 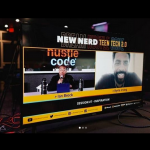