One of our favorite childhood book series has made its way to television. The best-selling book series Ivy + Bean, by Annie Barrows and Sophie Blackall, is on Netflix as a three-part film series. The series focuses on two VERY different girls whose drastic personality differences lead to the perfect combination of friendship and adventure. We had the chance to speak with Madison Skye, the young actress who portrays the role of the fearless Bean.

Starring in Ivy + Bean is this 9-year-old actress’s acting debut. Though she began as a model, she now has officially made her mark in the beloved series. The casting process, in her words, was “…tempting and suspenseful, but also very exciting… .” After learning she booked the role, she was on top of the world, especially with her first project being on such a huge network. “My mom, she thought that I was joking at first until she heard me SCREAMING because I’ve been off on auditions and auditions and auditions and this was my first one!” 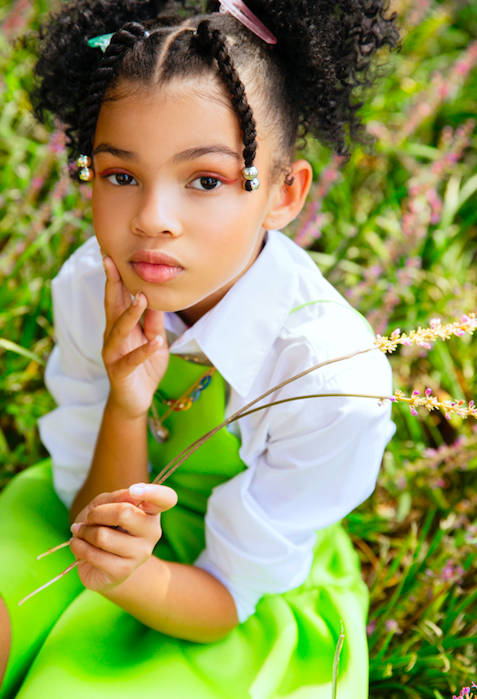 As the trilogy is based on the book series, there are many similarities and differences. From the storyline to the characters, the entirety of the project is truly unique! “It’s like the same plot and the same storyline as the book but not everything is exactly the same,” she says. Unlike the book, Bean’s character in the film is African-American, adding a new form of representation.

Ivy and Bean never expected to be friends. Ivy is quiet, thoughtful and observant. Bean is playful, exuberant and fearless. However, sometimes an adventure reveals that opposites can become the best of friends.

Madison Skye states, “…if you look at me and if you look at the book, we don’t look alike and so there’s a little bit of a difference there.” Madison Skye is a strong believer in inclusion, and is beyond excited to act as a new form of representation for young Black girls everywhere! “Back in the days, you would rarely see Black people in movies… I am a Black girl and I can just be in movies and prove to other young girls that they can do it as well.”

Fans of Madison Skye are already letting her know about her impact. “There was this one Instagram post, and it was like, ‘Oh my daughter said she wanted to be like the white girls with straight hair, but after she saw Ivy + Bean, she wanted to be herself again.’ That’s just so awesome to me,” the actress said.

Although a newcomer to the acting scene, Madison Skye has many powerful role models. But her biggest ones ultimately start back with her two brothers, who are also actors, and who continue to support her every step of the way.

Ivy + Bean isn’t the only project that Madison Skye has in the works. She also just wrapped a new Christmas film which she describes as “fun and adventurous” that will be coming to our screens soon.

For now, make sure to check out Madison Skye in Ivy + Bean streaming only on Netflix.

See our full interview with Madison Skye below.

Just a girl from Chicago who creates things for a living!