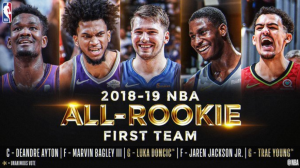 Notice something? All the names mentioned were the top 5 picks of the 2018 NBA draft. You might think that this is more common than not, considering that the top 5 picks of the draft should, in theory, be the top 5 best players of the draft. But the last time this occurred was in the legendary 1984 draft class, when Michael Jordan, Sam Bowie, Hakeem Olajuwon, Sam Perkins, and Charles Barkley all made the 1st team All-Rookie as top 5 picks. Four of those players made the NBA Hall of Fame, three of them won a MVP award, and two of them would become NBA champions.

What intrigues me the most about the 2018 draft class is the massive potential from the All-Rookie 1st team. Jaren Jackson Jr. already looks like a near All-NBA defender in just his rookie year, and seems to be a lock to be a Defensive Player of the Year candidate for years to come. Not to mention that Jackson is shooting 50 percent from the field and has a tremendous pick and roll game when paired with a good point guard. Bagley is a fluid and gifted player on the offensive end, having an array of moves to get the ball in the hoop easier. He is also one of the most athletic front-court players in the NBA right now, which ups his potential on the defensive end of the court, despite his rather weak defensive instincts. But these two are considered the weaker two of the five rookies, which seems insane.

Ayton is a offensive monster when he is given the ball and has the green light to score, and rebounds like a watered down Andre Drummond. If given the right tools, he can easily be a sidekick to a superstar on a championship-level team. Young came into the league with “bust” written all over him, but then developed into a crafty offensive player with a deadly shot who is a top tier passer in the NBA. Though his defense is atrocious, he definitely has massive potential on the offensive end, and seems to be a exciting player to watch for years to come. And while all these players have “star” written all over them, nobody in this draft class has as much superstar potential as Doncic. His rookie season statline of 20 points per game, 5 assist per game, and 5 rebounds a game have only been matched by Michael Jordan, Oscar Robertson, Lebron James, and Tyreke Evans. All of those names except Tyreke Evans are/were 1st ballot Hall of Famers, and considered as top 3 players at their position.

Saying that the NBA All-Rookie 1st team is promising is a understatement. These 19 and 20 year olds have massive potential to not only be stars in the NBA, but have the potential to run the NBA, much like four of the top 5 picks in the 2003 NBA draft class did (Lebron James, Dwyane Wade, Chris Bosh, and Carmelo Anthony). All we do now is wait and enjoy the ride.