As a part of the True Star Radio Broadcasting program for ASM, there are live lectures from the best of the best in audiovisuals, marketing, and design teaching the teens here how to make themselves known to the world. However, before we can rise to fame and success like they have, we must learn the technicalities: How to work with audio and how to present it as a beautiful gift to the ears of our audience. When it comes to the basics and the hardware that will bring you to your end goal, Paris Lawson Sr. knows the ins and outs.

Lawson is a part of the audiovisual engineering team at PSAV, which is a company that works with soundboards in social and corporate events, concerts, and other social gatherings where sound is crucial to the event’s success. In this Summer Session with the Pros, Lawson administered a Zoom lecture about live stream audio broadcasting and the hardware and software needed to make it run smoothly and successfully.

The True Star Radio Marketing and Broadcasting teams were there to tune in to the program for the hour that it lasted. As a person who was both part of the broadcasting program and had no previous experience with soundboards and other audiovisual technology, I was both interested and enthralled about the process.

Signal Flow, Down & Out

In an audio studio, there’s going to be a mixer present. A standard audio mixer controls the signal flow of the audio from your sources, including microphones, instruments, and other types of sound input. In order to control the sound flow, you have to know how to work with the audio mixer. Even though these mixers can come as hardware or software, signal flow must be understood as the connection between points A and B – the input to the output (the final audio recording.)

The knobs shown above are all part of the signal flow system, flowing down from the very source of the sound. On the physical soundboard, there are knobs that control the specified functions which can be modified to fit whatever arrangement you need. However, the signal flow falls in this order: gain, AUX, EQ/equalizer, PAN/panorama, mute, solo, and level.

Gain controls the decibel gain in the certain sound that is being brought through the channel. Turning it up increases the intensity of the sound, while turning it down would decrease the intensity of the sound. In addition to the gain button, low cut cuts all sound below a certain Hertz level, essentially ‘cleaning up’ the audio. Auxiliary (AUX) sends the audio to the external cords without messing with the base sound source, and controls how much of it gets there.

Equalizer (EQ) has three standard knobs, which controls pitched sounds and frequencies in order to correct the input to make it not too high or too low on the Hertz scale. Panorama potentiometer (PAN) sends audio more towards the left or the right output (speakers or headphones.)

Muting the channel is another option, which cancels the sound in the whole channel, above modifications and all. The opposite of the mute is solo, where every other channel is muted than the selected one. Next is the level, where it turns up all of the above settings in the signal flow to higher decibels or lower decibels.

All the way to the right of the mixer panel are the control room and main mix panels. The control panel is the sound typically sent to the producer’s room so they can see what’s going on in real time, and the main mix is sent to your headphones or an alternate output or final cut. This is the last step of the signal flow, so when this is complete, the final sounds make its way to where it is being recorded or live streamed. 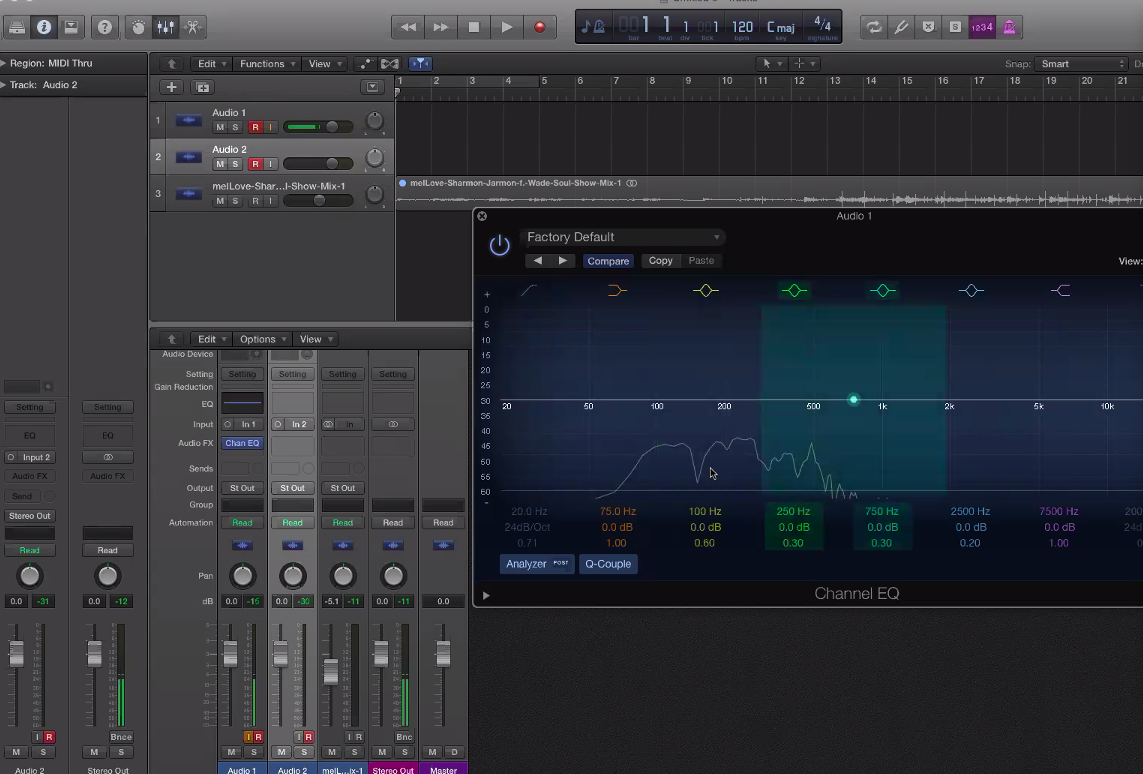 Software DAWs, or digital audio workstations, convert audio signals to digital signals, which converts soundwaves to digital data that can be converted and transmitted to other sources. Logic Pro X, the program that Lawson owns and was presenting to us, is essentially the same as the physical audio mixer along with the same functioning with a similar signal flow. The signal flow works the same way as the standard audio mixer, but the input audio is plugged directly into the computer while the output is saved directly to it.

Software can cost anywhere from free to hundreds of dollars, but there are viable options for all platforms. StudioOne, Audacity, FL Studio, and Garageband are all examples of audio interfaces that are free and accessible on almost all platforms on PC and Mac. iRig is a direct instrument to phone jack mixer that only costs a hundred dollars. No matter what, there’s always going to be ways for you to work with live streamed audio.

As a demonstration for the final part of the lecture, Lawson invited our instructor Sharmon Jarmon to sing one of her original songs in order for us to see how Logic Pro X dealt with the sound. Despite the technical difficulties that lasted for a few minutes, it was amazing hearing how the sound worked and changed in real time with the singing. At the end of the stream, Lawson took a few questions about different softwares and we all departed with the new knowledge he gave us.