Vadim Shumkov, governor of the Kurgan region in Russia and close ally to Russia’s president, Vladimir Putin made headlines after he went on an unprovoked racist tirade on his official Telegram channel recently. This rant comes amid rising tensions between Russia and Ukraine due to Putin’s unlawful invasion of Ukraine in February of this year. According to the thedailybeast.com, on Shumkov’s tirade, he foolishly blamed rising suicide and depression rates among youth in Russia on music made by Black Americans. He even went on to call Black Americans “descendants of African American slaves,” which is not only ignorant but also diminishes the heritage of African Americans to the atrocities of slavery.

Shumkov’s inflammatory remarks goes to show that not only is racism still very much alive, but Black people continue to be the scapegoats for issues that they have nothing to do with. I mean how did Shumkov conclude that Black rap and R&B music is the main cause of rising suicide rates? How can he completely overlook the conflict that Putin has caused between Russia and Ukraine (the bombing and invasion of Ukraine) that could be a reason for feelings of depression among young people? Instead of taking accountability for the brutal actions of his ally, Shumkov would rather blame the artistry of Black people.

As well as insulting the African American community as a whole, Shumkov also insulted the music created by Black Americans and how it is spread throughout Russia. He called the spread of music made by African Americans “second-rate quasi-cultural vulgarity,” essentially condemning Russian youth from listening to music made by Black Americans. Shumkov then went on to say that many children are being raised “without knowing their kindred tribe.” Although nationalism/patriotism is not inherently destructive, Shumkov’s beliefs of Russian nationalism reject the spread of culture and art from other groups of people. Being closed off from other cultures of other areas of the world only creates more ignorance and leads to the formation of stereotypes of people who are minorities in Russian society. 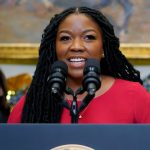