As the NBA season is approaching, the topic of whether or not players will receive the vaccine is growing. Many players have opened up on their decision to get the COVID-19 vaccine. Some of those players include Bradley Beal, Kyrie Irving, and LeBron James.

When the vaccine was initially released, four-time NBA MVP, LeBron James, had much skepticism. But, recently, at the Lakers’ annual media day, the Los Angeles superstar spoke with media and revealed he and his family received the vaccine after doing his own research.

With James being one of the most renowned stars in the world, many expect him to advocate for the vaccine. However, he totally disagrees.

When asked by reporters if he would help  push the vaccine, James was quick to explain why he would not.

Brooklyn Nets star Irving has yet to confess his vaccination status, but ostensibly he is liking posts from anti-vax conspiracy theorists. Unfortunately for Irving, New York City has a vaccine mandate effectuated, meaning he would be unable to play in all Nets home games (which accounts for half of their season), assuming he is unvaccinated.

In a statement Wednesday, Mike Bass, NBA executive vice president of communications, announced some bad news for the unvaxed players. “Any player who elects not to comply with local vaccination mandates will not be paid for games that he misses.” Yikes.

Beal, of the Washington Wizards, and Orlando Magic’s Johnathan Isaac have expressed their reasons for not getting the vaccine and are firmly against people pressuring others to get the vaccine.

Sadly, players with similar views to Isacc and Beal have endured much criticism and undeserved resentment from the media and NBA Hall of Famers, such as Kareem Abdul-Jabbar, who recently slammed the league’s vaccine refusers. “The NBA should insist that all players and staff are vaccinated or remove them from the team,” said Abdul-Jabbar.

Abdul-Jabbar added, “There is no room for players who are willing to risk the health and lives of their teammates, the staff, and the fans simply because they are unable to grasp the seriousness of the situation or do the necessary research.”

The NBA has vowed not to require players to be vaccinated to play. But, players who accept the vaccine receive incentives, including being tested less often and being able to enjoy teammates in the locker rooms and other indoor activities.

About 90 percent of the league is vaccinated (the other 10 percent accounts for 40 players).

If you are someone who is still on the fence, be like James and do the research for yourself. Don’t forget to wash your hands frequently and mask up when you are on pubic transportation or in an indoor public setting. 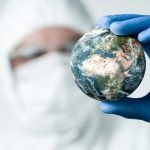