This week, NASA showed us some pictures of the deep cosmos by using the James Webb Telescope. According to the New York Times, the telescope “offered a spectacular slide show of our previously invisible nascent cosmos. Ancient galaxies carpeting the sky like jewels on black velvet.” The first picture released by President Joe Biden had my personal favorite astrologist, Neil deGrasse Tyson, in a state of pure excitement. The picture depicts vast galaxies and stars too many to count, but Tyson says the area that the picture makes up is only a grain of sand compared to the rest of the sky.

The pictures released are monumental, as they will help scientists uncover the secrets of life’s origin. John Mather, senior project scientist for the telescope, said “We’re looking for the first things to come out of the Big Bang.” In case you don’t know how telescopes work, the new pictures of the cosmos from the telescope are billions of years old.  Jane Rigby, a NASA astrophysicist, says, “That was always there”… “We just had to build a telescope to go see what was there.” 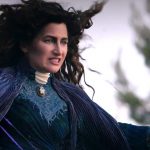