Smash and grabs and just flat out stealing seem to be becoming a regular thing. Recently a group of suspects broke into the Moose Knuckles store on the Gold Coast and wiped out everything on the first floor. If you don’t know, Moose Knuckles is a retail establishment filled with winter coats for this brisk season. ABC 7 Chicago stated that less than a half-hour later after that robbery, five men broke into the Burberry store on Michigan Avenue.

Are we really going to bring in the new year by continuing to steal from high-in stores? Jayla Powell, a freshman from Southern University, stated, “The burglaries of Moose Knuckles and Burberry make me think of the phrase ‘keeping up with the Joneses.’  Many people of this generation are influenced by what they see on social media and feel as if they have to keep up a certain appearance to receive approval by individuals through social media who they don’t even know.”

This urge and need to be accepted has pushed young people to the extreme to keep up appearances making shoplifting thee thing to do. These acts showcase how social media has a considerable influence on this generation. If you can’t afford something then work until you can purchase it for yourself. It’s never that serious to result to burglarizing stores. Getting something is always better when you work and earn it.

Maurion Shelly, a senior at Gwendolyn Brooks College Prep, stated, “People can’t afford designer prices but want to maintain designer looks to keep up with societal views and expectations, so they steal.”

People in this generation are getting too caught up in their look, status, and being accepted, when all you have to do is be you. Amaurianna Price, a senior at Simeon Career Academy, stated, “I feel as though this is a bad start  to the new year, and it just shows how our generation is becoming more out of order and distracted.”

Hopefully these false standards of acceptance take a backseat to the things that really matter. With any luck, personal values, intelligence, respect and kindheartedness make a comeback in 2022. 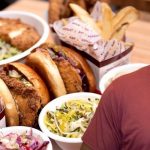 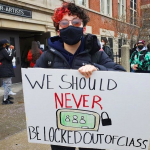