T-Boz, who was the “T” in the in the 90’s group TLC, is getting her own reality show on the network TLC. According to Bossip, the show is centered around T-Boz being a single mom trying to get her music career back on track after recovering from a brain tumor that was so bad, that after it was removed, she had to learn how to walk and talk again. Praise God that she did.

At first, I wasn’t going to watch it, because I feel like they give anybody a reality show these days, BUT after hearing her story and hearing what she’s trying to do, I will be watching it for support for her because her story is so inspiring. 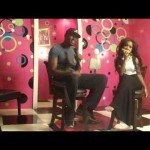