“The Offer” is the type of series that’s underrated but deserves the utmost of praise. This new hit series takes us behind the scenes of what it was truly like producing the iconic film The Godfather and why it almost never saw the light of day. The 10-part episodic series is available on the Paramount+ streaming service for all those who are obsessed with the original cinematic film.

In April, I was invited to the red carpet premiere for “The Offer” where I was able to interview a few of the cast members as well as other A-list celebrities that came in support of the production. During the screening, we had the experience of watching the first two hour-long episodes of the series and I was immediately impressed. The casting done for this project was immaculate with trying to portray the real life people who had their hands in the making of The Godfather. As someone that was always taught that The Godfather was film royalty, this new series gave me every motivation to finish the original trilogy. I have to say, the older you get, the more appreciative you become for authentic moments in history such as the impact this film made.

Miles Teller who played the leading role of Al Ruddy in this Paramount+ series was definitely captivating. Before watching this series I truly missed seeing the true talent of Teller starring in roles. However, this series showed the authentic versatility of his range and that he’s passionate within every role he receives. His performance during the show increased my intrigue with my surprise that the mafia almost shut down the production of the original The Godfather and that Al Ruddy could’ve been murdered in real life due to producing this film and not backing down. The chemistry between all of the actors and parallels in the film that mimicked the original masterpiece was stunning.

Another actor that truly surprised me with his range in this series is Justin Chambers who played Marlon Brando. There was one scene in particular where this actor was portraying another actor in the series who was preparing for the role of Don Vito Corleone. The way he came to life almost made you forget that this wasn’t happening in real time and that they were completely three different people. However, in the behind the scenes making of that episode, the director explains that the magic the audience should feel while watching this scene actually did mesmerize  the entire cast and crew during the shooting.

For all my iconic film lovers and those who love the history of how certain productions came to be, the series “The Offer” captivates this 1972 era perfectly. I’ve walked away from this series not only knowing the never before told stories of the intense and oftentimes frightening drama that went behind the scenes of producing The Godfather, but it also opened my eyes to how a Hollywood studio such as Paramount+ was run and what it truly takes to be successful.

Make sure to catch this series on Paramount+ and vote your reaction below! 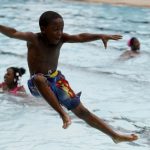