The festival also featured special guest appearances from Genesis Hale from the hit TV show “The Chi,” DJ Will Thrill, Dex Millions and many more. The event featured side activities where you could interact with different activations. Paint the City had stations where attendees could paint and had sidewalk chalk so you could draw on the ground. Power 92 was there holding raffles for free tickets to Six Flags and there was also a hookah lounge for adults.

The festival, in partnership with Rite to Wellness and Black Culture Fest, was great overall and should be on your watch list for next year. There was a little rain, but overall everyone stayed and all the artists put on an excellent show. Over the last 15 years, Gatlin’s Swank Public Relations has been a leading trailblazer within the Chicago entertainment industry breaking major artists and brands including Tink and Raekwon. The festival was family friendly, non-violent and might be something that helps to bringing Chicago together in the future. 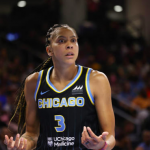