So I’m quite sure everyone has seen or heard about the show that reacts events portrayed in Chicago, The Reawakening.I had the opportunity to interview Sharnece Watson.You may know her as “TaTa” from the show.Yes, ladies & gents–I am referring to Willie’s crazy girlfriend who would not give him 25 dollars for a bus card. Watson is Donte Fain’s assistant as well.Dante is the writer,producer, and creator of the dramatic series.

Before we get into exactly what was said in the interview, you guys should know by now I ALWAYS share my opinion! Before deciding what questions needed to be asked I made a bunch of my college friends watch the entire season 3 of the show. Those of us who are from Chicago were a little edgy. We know that Chicago is portrayed as “Chiraq” but we were not pleased with it being shown all over television. We were astonished by the actions of the males. It just seemed all negative.

I had to ask Sharnece, “What messages were being portrayed? Where are the positive messages?” Her response gave me a better look on everything. She stated, “The overall message of Reawakenng is to inspire the upcoming generation to make better decisions based off real life situations. It is supposed to show events in which the outcome of negative things can turn out all wrong if you handle it in negative ways. ” She went on to say that their upcoming season 4 of the show “will be 99% positive. We cut out all the cussing and guns. The only people who will have guns are police officers because they have to wear them. It will be completely PG.” Season four is suppose to be more professional.

Sharnece went on to say, “I am really excited about the new season. It will be aired in more than one city this time. It will be in New York, Atlanta, Minnesota, and Chicago.” I always do my research before interviewing someone. I found out that people were not as pleased as they should have been with the first few seasons and I had to ask her how they were dealing with the criticism. She informed me that “The fans expect a lot.We turn criticism into lessons to better the show. We do not ignore them. They will get mad at us for not putting an episode out on time. They hold us to a certain expectation. We need and love our fans so we value their opinion.”

I always keep True Star’s fans in mind, so I asked you guys via Twitter,which is why you all need to follow me, what questions you had for the Reawakening producers. I chose two of your questions. One was what was the role of  the homeless man in season 3? Sharnece stated, “He played the role of Eric’s father. He made many mistakes with AIDS. He was there to show that life is not to be played with and to keep faith. He showed that you can end up dead if you keep taking a certain route in life. It can end up in a whole bunch of bs.”

The second question I asked was what advice would you offer people who want to be in the entertainment business? She said with confidence, “My advice would be to chase your dreams. With any dreams, put on your track shoes and chase them. They’re not going to walk to you.”

Sharnece Watson and I had a long and productive conversation with numerous laughs. She def changed my perception on the show. She stated Donte is a great manager and is very helpful .She gave him all the credit for success in general. If you want to audition for the show, there will be workshop registrations on both Nov 17 and Nov 18 at 12 p.m. One will be located 2010 West 83rd Street on the south side of Chicago. The other will be located on the west side at 3330 West Roosevelt Road. It is a 35 dollar registration fee.

True Star wishes both Donte and the entire cast success with The Reawakening! 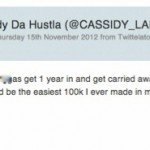