“The Witcher” has officially been renewed for a fourth season by Netflix; exciting news for fans that came with a shocking catch.

Henry Cavill who’s played the series’ foremost main character, Geralt of Riva, for the past three seasons will be stepping away from the project to make room for Liam Hemsworth who’ll pick up the role.

“My journey as the Geralt of Rivia has been filled with both monsters and adventures, and alas I will be laying down my medallion and my swords for season 4,” announced the actor in a recent Instagram post.

Cavill didn’t state any reasoning behind this decision but went on to share a personal message with Hemsworth, saying “Liam, good sir, this character has such a wonderful depth to him, enjoy diving in and seeing what you can find.

“The Witcher,” which first premiered on Netflix in 2019, is adapted from a series of six fantasy novels and 15 short stories originally written in Polish by author Andrzej Sapkowski. The plot of both the show and the books follows Geralt, a mutated monster hunter, who is taken on dozens of wild plotlines and adventures in an unnamed fantasy world.

Cavill has faithfully and artfully played this character for two seasons, with the third starring him set to release next summer. So as one can imagine, the sudden decision to completely recast the role of Geralt was met with a frenzy of condemnation and confusion online.

“Imagine how much has to go wrong with your project to get a super-fan like Henry Cavil to drop his dream role,” speculated user @PandasAndVidya, referencing how hard Cavill fought for the role as a huge fan of the books and games.

It was something I wasn’t going to let pass me by without giving it my best shot,” Cavill said at Comic-Con in 2019. “I annoyed my agents all the time. They said, ‘They’re not ready.’”

Other than an attachment to Cavill’s performance as Geralt, it’s more than that for many fans. They’re also scared of the ways that this will negatively affect the beloved series. Will fans watch now? Its well-known viewership is one of the biggest things that affect the renewal of new seasons. With so many people already claiming that they won’t be tuning in due to the casting switch, concerns for the survival of “The Witcher” are rising.

Despite the very large weight and responsibility that will now befall Hemsworth, he seems locked and loaded to get into this new role, saying on his Instagram, “As a Witcher fan I’m over the moon about the opportunity to play Geralt of Rivia. Henry Cavill has been an incredible Geralt, and I’m honoured that he’s handing me the reins and allowing me to take up the White Wolf’s blades for the next chapter of his adventure. Henry, I’ve been a fan of yours for years and was inspired by what you brought to this beloved character. I may have some big boots to fill, but I’m truly excited to be stepping into The Witcher world.”

He’s right about having big boots to fill. I guess all there’s left to do is wait and see whether or not he trips over them. 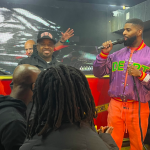