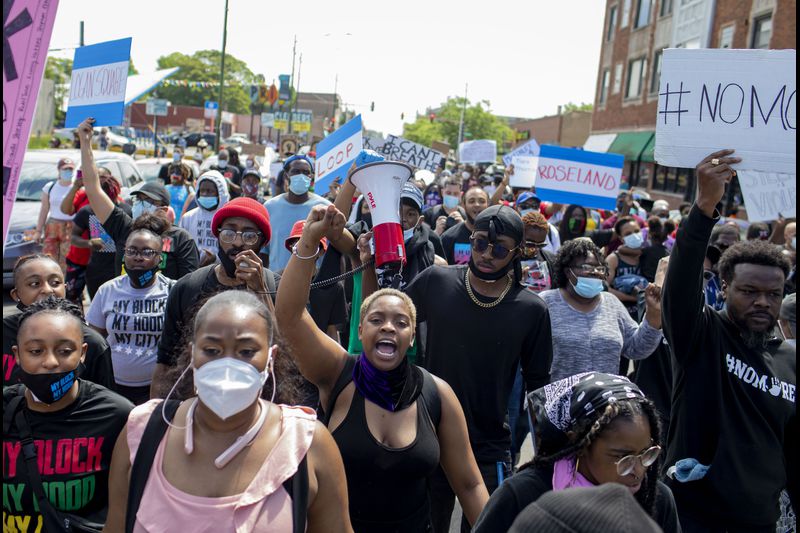 There’s just something about being in a completely open and receptive environment. That feeling of knowing that you can say what you feel or what you believe in without harsh judgement from others is something that we don’t get to experience often. I mean, how many of us have even experienced that feeling at all? This is the sensation that has been absent on social media platforms, like Twitter and Instagram, where your words can easily be misinterpreted through those 280 characters.

This feeling came back to me recently during True Star’s Teen Hall, which strived to empower the youth and encourage them to use their voices to speak up about what they believe regarding the continuous racial injustice Black people experience around the world. As a host of the discussion, I was extremely excited and eager to create a space where teens can listen to one another, learn from each other, and debate respectfully.

✊🏾 @True.Chi Town Hall Meeting #WhatChiSay • Police Brutality, Protests, Violence, Destruction Have your voice heard on the matters Tomorrow Tuesday June 02 5:00 PM CT 🖤 • DM us if you want to have your voice heard. We'll send you the link to our zoom event. ⚡️ ✊🏾 Update: Link in Bio

And we did all of those things and more. The conversation started with a few people sharing their experiences protesting and the dangerous situations they found themselves in. One of True Star’s own, Erin, explained how a peaceful protest soon got violent after the bridges downtown were brought up. “I got tear gassed,” Erin said.  “A glass bottle was thrown at me… I was like, ‘I need to get the hell out of here!’”

Erin’s experience was synonymous with all of the videos we’ve been seeing on social media. What she shared sparked more dialogue about other forms of activism. It was “Blackout Tuesday” and the controversial trend was bound to become the topic of conversation. Mya, a participant in the Zoom event, was offended by the movement as a whole. “There’s no black out,” she said. “We are definitely in!” Others believed it could be seen as strictly performative activism that clutters the really helpful information about petitions and protests on the TL. Zach, a True Star team member, shared that he believed the effort would’ve been more effective if, “there were no hashtags at all.” This made it clear that there were still strides to be made with organization in the movement.

The word “reparations” was thrown into the mix, and that’s when things got interesting. How could the country pay back Black people for being the backbone of America? Most agreed that everybody would have to get on the same page about the systematic oppression and 400+ years of racism and control that Black people endured first before we could ever step towards a payback. Reparations were supposed to look like 40 acres and a mule, but what would the modern version be? Corinne, another participant, thought that would look like reinvestment into Black communities, so we can start to close that gap. It was interesting to shift the conversation to focus on a possible solution that we can achieve and evaluate how viable it would have to be to benefit all, if not most, Black people.

It’s important to have these types of intellectual conversations about all topics ranging from the function of the Black Lives Matter movement and the stubborn roots of racism within the United States, because it reveals and solidifies the need to dismantle the systems put in place to secure racism’s role within society. This youth Teen Hall evoked new thought and proved to be an inviting and rigorous space to talk. If you missed out on this one, follow us on Instagram @true.chi to find out when you can catch the next one! BLM!

Watch the full Zoom event below.