Since his infancy years, the age of three to be exact, Jâ€™Real has been singing and entertaining everyone in the room. His teachers remember him because heâ€™d be the loudest child singing in the holiday programs. Since then, he has taken the business of singing and rapping professionally and Jâ€™Real has proven to be unlike any other rapper or singer in his category. Before heading off on his Atlanta tour, Jâ€™Real took some time to talk with TrueStar and discuss his new singles, why being a community leader at a young age is so important to him and whatâ€™s next.

His single â€œJust Say Itâ€, directed by Skyline Productions has a simple concept that Jâ€™Real wants to get across to his fans; if you love someone, just say it. â€œIn the video, I was trying to get my girlfriend to say she loves me. Weâ€™ve been together and now itâ€™s time to take it to another level. Throughout the song I talk about how much I love her and now I want her to say it to me,â€ Jâ€™Real says of the song. His newest single, â€œWhy You Mad Thoâ€, has been getting major play across the radio in Chicago, from WGCI playing the record to the major response heâ€™s been getting from his fans. Jâ€™Real explains, â€œWhy you madâ€, is catchy and everybody likes itâ€¦it was good to see that a lot of people loved it and the video wasnâ€™t even out yet. [The success] of that record felt good.

To be a young entertainer creating your own lane can sometimes prove to be challenging but Jâ€™Real explains that he has a different plan for the music industry, â€œIâ€™m trying to bring back expressing yourself in RnB .I definitely draw from experience in my life in my music. â€œ

Not only is he trying to change the music industry, but also the violence and bullying that surrounds some of the communities on Chicagoâ€™s South Side. A few years ago, Jâ€™Real and one of his teachers, Pete Retsos, created a youth organization at Phillips High School called, â€œHistorical Voices Changing Modern Mindsâ€ where they are promoting peace and positivity in different communities. Since launching, they have created several peace walks throughout the communities, sometimes even in the Chicago winter coldness, marching for more peace and less violence. Theyâ€™ve held youth events, and talent shows giving youth the platform to share their gifts and creativity. â€œThatâ€™s a very important part of my life,â€ explain Jâ€™Real. â€œThatâ€™s on the same level as music. Thatâ€™s one thing that Iâ€™ll always do; which is to give back.â€

Giving back and creating awareness is one of the reasons that he created the â€œStop the Bullyingâ€ tour which is where Jâ€™Real is headed to next. He toured around Chicago earlier this year and now he will be joined with three other artists to create a 20-30 stop school tour across Atlanta. He explains, â€œItâ€™s also about connecting with my supporters, because [bullying] itâ€™s a big issue in the school systems right now. We started targeting schools with a message about bullying.â€

With all of this positive and creative music under his belt at a young age, itâ€™s no wonder why Jâ€™Real is popping up everywhere. Here at TrueStar, we know youâ€™ll be hearing a lot more from Jâ€™Real, make sure you support and keep a look out for this star. You can check out his newest music videos on, ItzJReal 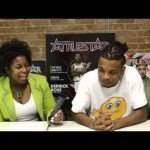