The George Floyd murder was something that shook the world, literally. As someone who lives in England, for the first time I witnessed through social media the meaning of the struggle to be Black. Throughout my life, racism, black tax, prejudice and more were not really things I was aware of. I’ve since been forced me to question my own morals and to think of how I can use the beautiful colour of my skin to change the stereotypical perceptions of dark skinned people. I have decided to use my voice more and not shy away from issues that affect people of colour. That includes writing for this publication. I have also signed up to join the racial injustice group in my school to create change.

Floyd’s murder has been the beginning of change in a lot of ways. The fact that a police officer was convicted of Floyd’s death is a major part of that change. I think the sentence for Chauvin was not fair, but it was not unfair. Regardless of the years Chauvin will face in prison, they do not make up for the fact that Floyd is no longer living in this world. This sentencing does not make up for the fact that his daughter Gianna Floyd will not be able to go out with the father. It does not justify the fact that what Chauvin did was outrageously wrong and disgusting.

Nineteen-year-old Christiana Alausa said, “His sentence should be longer because people who do crimes such as robbery, drugs, etcetera, get a life sentence, whereas Chauvin has taken someone’s life and was only sentenced to 22.5 years. It makes no sense!”

Jossline Arthur, 17, said, “He should have gotten life and never allowed out.” She followed up by saying, “He had too much freedom within the duration leading to his trial.”

I can understand where each of them is coming from; I’m just ready for change!

What we can learn from this is that the life lost has potentially given life to so many. It has given voices to many, given courage to many and given hope for so many. I’ve learned to embrace the skin that I am in. There is a common saying, “I don’t see colour.” If I’m being honest, I see colour but I choose to embrace it. 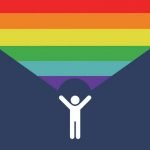