The title of this series is exactly what it sounds like. When I first heard of the new Netflix series and saw the title, I definitely had to do a double take. However, this is the perfect satirical title for the iconic psychological movie thrillers that it’s spinning off of.

The trailer is promising for the series as it captures your attention with the play on satire and mix of thriller, but it’s really the lead actress who caught my interest. Usually, in all of her work, Kristen Bell is known for picking satire pieces that truly play to her strength as an actress. Her work in Bad Moms and Forgetting Sarah Marshall has established credibility within the comedy realm. However, I had never seen Bell in a role such as this. And honestly, I’m not too sure how I felt about her performance.

I definitely don’t think that this series should have had eight episodes, but that they could’ve made it into a satirical thriller movie and kept the same guidelines such as The Woman on the Train or The Woman in the Window that didn’t drag out the main point for excessive hours or episodes. Although I thought the necessary episodes weren’t vital, there’s a certain intrigue surrounding murder mysteries that still captivates audiences throughout the series.

Although this series is a comedic spoof, that doesn’t mean the show wasted any space to incorporate racy scenes that could still make you feel uncomfortable when watching with your parents. One fan/Twitter user watching the series took to his platform to express the awkwardness that he felt while watching an unexpected scene with his mother and girlfriend. According to msn.com., “Eric took to Twitter to express his shock over the sex scene, which he watched ‘with my girlfriend and my mom in the same room…’ Possibly even more shocking to Eric was the fact that Bell soon commented under the tweet, writing, “Hahahahaha sorry dude.”

If you haven’t seen the trailer for the new Netflix series, check it out now. 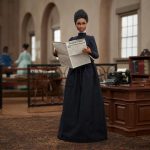 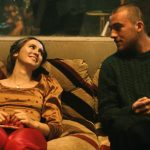