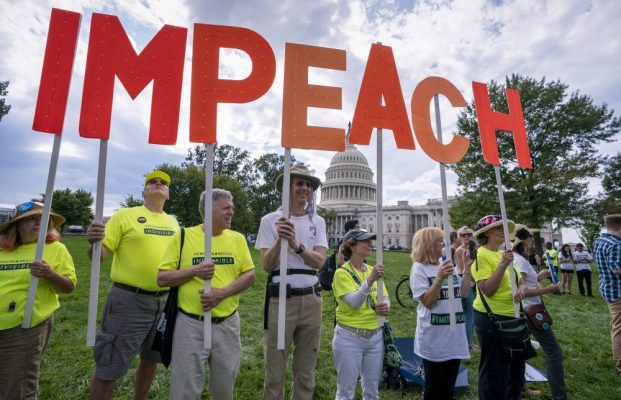 Let me start this post off by stating my strong hesitation to write this article in the first place. I’m hoping these next 500 words of journalistic expression does not act as some sort of jinx. So prayer hands up to the Almighty that we are actually granted with the blessing we so desperately need. Now that that’s out of the way, let’s get to it.

He might be out y’all. He just might be out. And here’s hoping. Not sure how many of you have been following the latest scandal surrounding our country’s so-called leader as of late, but more drama (or truth depending on your view) has made its way to his image.

Trump — and no I won’t address him with the “appropriate” title for reasons such as I don’t want to — faces possible impeachment charges simply because he is an idiot. Nah, that’s not the real reason, but when you get to the bulk of it, essentially that is the real reason.

If you guys are having a hard time trying to keep up with all of the drama don’t worry you are not  alone. To summarize the sequence of events:

Right now I want to offer a round of applause to the genius who made all this happen (AKA the whistleblower), but we still have to touch bases on Trump’s level of intelligence. For starters it does not exist. To this day I am baffled by how deep hate runs in this country to the point where an unapologetic bigot was elected in the year of 2017.

After the news of this latest scandal broke free a gang of politicians had some interesting commentary:

“The President has admitted to asking the President of Ukraine to take actions which would benefit him politically. The actions of the Trump presidency revealed the dishonorable fact of the President’s betrayal of his oath of office, betrayal of our national security and betrayal of the integrity of our elections,” Pelosi said in her public remarks.

“We will never find the truth unless we use the power given to the House of Representatives and the House alone to begin an official investigation as dictated by the Constitution. The future of our democracy is at stake,” said civil rights icon Rep. John Lewis.

The future of democracy was at stake when he was campaigning, but he was still elected.

What I do not want is for us to play the “so surprised so shocked” game. We know what Trump is capable of, and we know exactly what he’s about. His political agenda is no mystery to the world. So we should make an effort to keep our speech as candid as possible.

I could offer up more commentary on this matter, but my feelings towards this man’s presidency is no secret. And more importantly there is a ton of back and forth right now so who knows what the outcome will be. I know what it should be, WE ALL DO! There is a long list of illegal activity Trump has committed, and we have seen little to no consequences. Plus my word count is not large enough to expose said list. I wish Nancy all the best in her efforts.