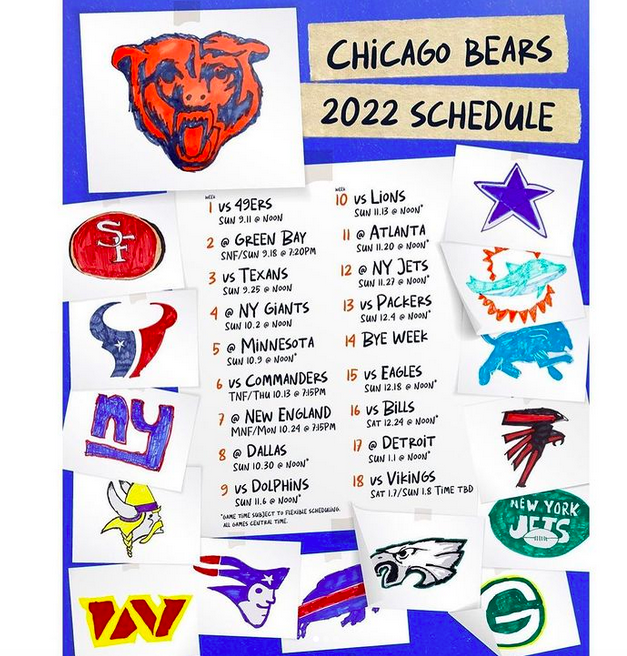 As the start of the season comes closer and closer the NFL has released the schedule for the Bears. In the wake of this beautiful milestone in the journey to the 2022 season, let’s look at the first five games of the Bears season and try to make some accurate predictions.

We have a total of three preseason games,where we go against the Chiefs, Seahawks and the Browns in that order, but our first official game is against the 49ers on September 11th. In this game we will see Justin Fields go up against Trey Lance, both from the same draft class. Official sports guys say the 49ers have an edge over us, saying that we need time to adjust to changes made to improve our offensive line. I disagree and think we’ll beat out the 49ers at Soldier Field for the first game of the season, as we have three entire preseason games to adjust to any changes made in our game plan.

Our second game is against our arch enemy, The Green Bay Packers on September 18th. Unfortunately, the Bears haven’t beaten the Packers at Lambeau Field since Thanksgiving of 2015. The Packers have been spanking the Bears for almost as long as I’ve been alive, which is 17 years. With that being said, I have little faith in us taking the dub in our second game. Although I have little faith, I believe in miracles and I’ll be cheering them along no matter what.

Our third game is against the Texans on September 25th, which I have full confidence in us winning. The Texans, like the Bears, are a team who have been struggling to find their footing in the NFL, but given the fact we’ll be in Soldier Field gives them the advantage.

In our fourth game, we find ourselves playing the one decent New York team, the Giants on October 2nd. I think the Bears will edge out the Giants in a close game, for the simple fact we play better football.

Finally in the fifth game of our season, we play against the Vikings on October 9th. Due to the fact that last season we lost to them at home and away, sports officials say we are bound to lose again to Kirk Cousins. It pains me to say, but they might be right, as Kirk Cousins is a G.O.A.T.

The Bears season will have a total of three prime-time games, and I’m excited to see what the season entails, win, lose or draw. With the new coach and new drafts, I have newfound hope.