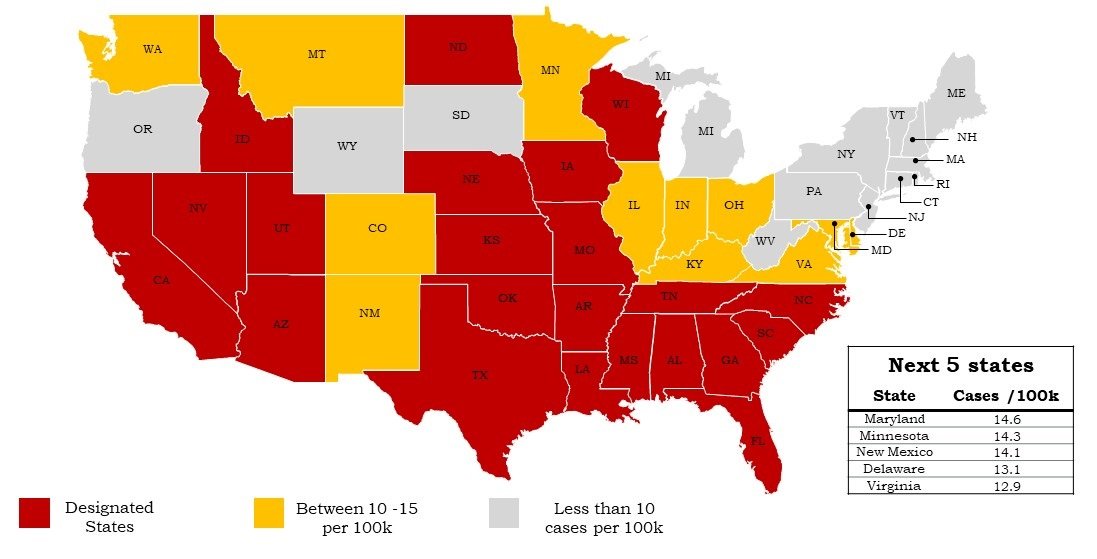 As most people probably already know, at the beginning of the quarantine Chicago was one of the cities with the highest number of confirmed cases. Now that those numbers have started to drop (well, sort of), Mayor Lightfoot is doing everything she can to ensure that they continue to fall. The most recent safety precautions include a new travel order. The City of Chicago website states, “On Thursday, July 2, Chicago Department of Public Health Commissioner Allison Arwady, M.D., issued an Emergency Travel Order directing travelers entering or returning to Chicago from states experiencing a surge in new COVID-19 cases to quarantine for a 14-day period from the time of last contact within the identified state.”

This new travel order is made for those coming to Chicago from the 18 states, most of them being in the sunbelt. These states, according to the City of Chicago website, include Alabama, Arkansas, Arizona, California, Florida, Georgia, Idaho, Iowa, Kansas, Louisiana, Mississippi, North Carolina, Nevada, Oklahoma, South Carolina, Tennessee, Texas, and Utah. These specific states were listed because their numbers of confirmed COVID-19 cases have sharply increased in recent months. Our neighboring states of Wisconsin and Indiana also pose as a threat.

My thing is, will this “order” actually work?

Now, don’t get me wrong, I appreciate the fact that our mayor is attempting to do something that will lower our confirmed case numbers, but I don’t exactly understand how this method will be successful. If we can’t get everybody to wear a mask, how exactly can we force people coming in from these other states to stay in quarantine for two weeks?

It’s a good idea in theory, but not so much in practice. The way that I see it, only those traveling by way of airplane will be able to be forced into quarantine because there’s a record of them entering or attempting to exit the city. Knowing that this travel order is being put in place would encourage people coming in from the growing list of states to travel in ways where it can’t be documented such as by car.

This travel order was introduced a little under a month ago but since then there has been another jump in confirmed cases in Chicago. Will the order be altered so that the numbers are dropped or will we continue to practice something that hasn’t proved to be successful?