There’s been one song I’ve had on repeat since the release of Young Thug’s latest album Punk’d. Although I’m very much in love with the album, as usual, this one song in particular truly set the tone of what I thought the message captivated. And that song is “Love You More.”

Hoping you call ’bout anything

I love when you call me about anything

I love how you don’t doubt anything

‘Cause I love the way you call my phone

In every Young Thug album it seems to capture this authentic artist in every true form of his being. From iconic albums and their covers of Beautiful Thugger Girls, Slime Season, I’m Up, Barter 6, and more, Punk’d doesn’t fall from the high expectations it’s met. However, in this album, we see more of a sensual and softer side to Thugger as he pours out his emotions in this album. This song, “Love You More” featuring Nate Ruess, Gunna & Jeff Bhasker is nothing but a sweet and soothing melodic love story in these verses.

Girl, you know I love you, ain’t disrespect whenever I’m tardy

Walking around with a shopping cart, we tearing down Barneys

Oh, girl, I want you badly

Thugger is known for one of his love languages as being gifts. The luxurious and elite items that he’s gifted his closest friends and relationships always remind us that he has very expensive taste. So of course, the woman he’s referring to in his lyrics is being spoiled by his love for spending massive amounts in Barneys and stating that he loves her more than anything. He’s not saying that he’s trying to essentially buy her love, but he’s trying to show his affection in numerous ways that he knows she might like.

Another song that’s been dominating iTunes and has been trending as one of the best tracks on his album is titled “Faces.”

Got me thinkin’ everybody ’round me cheatin’ (Yeah)

These n*ggas basic, they need to face it

I’ma turn off the light

Lil’ shawty, is you breathin’?

Tell me if you caught a fever

Strictly fu*kin’ up every season (Oh)

Young Thug’s confidence in knowing that he’s “one of one” and “goated” isn’t surprising as he reminds everyone else that they’re just playing catch up. I love the balance that Thugger seemed to successfully embody on this album by channeling a different energy that we may not have gotten from one of his previous projects, but they’re all legendary nonetheless. Make sure to check out his latest album Punk’d that’s streaming on all platforms. 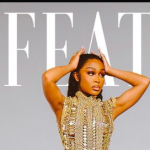