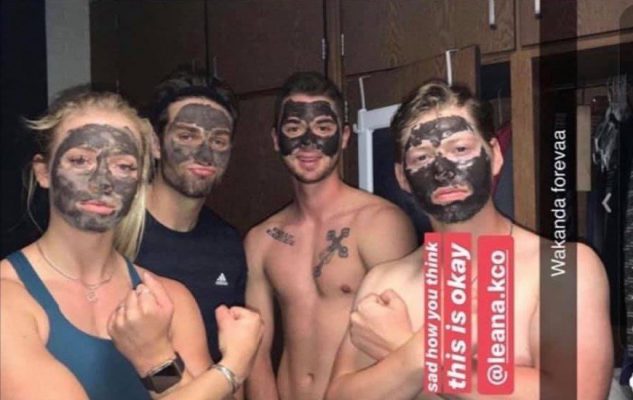 Can we just come to an agreement with each other? White people or Caucasians, you know the difference between right and wrong. Moreover, you know what is racist and what is not. So let’s stop pretending that black face is not offensive, or that it’s just a joke, or just a way for kids to express themselves. Cut the crap.

Last week, Colorado stepped on the scene for the latest racist debacle in this country. Colorado State University students posed in black face while striking the Wakanda forever pose. Yes, they were White. And yes, they are not getting punished… Would you like to know why?

Ding, ding, ding you guessed it! Because they are….White. At least that’s my logic behind it. The university has different logic. The students won’t be punished by the school because of First Amendment rights, administrators said.

The university expressed their concerns and understanding in a letter on the school’s website. President, Joyce McConnell, and two other administrators said they understand the image caused “a great deal of pain.”

Please. Black people have endured a lot worse than black face in this country. It’s not pain we are feeling anymore, it’s pure frustration.

“We have heard from many of you — and we hear you. Moreover, we respect your voices. We know that images like this one — whether consciously racist or not — can perpetuate deliberate racism and create a climate that feels deeply hostile,” the letter read.

Administration claims that they have no control over personal social media accounts. Students and faculty can post whatever they want because they are protected under their First Amendment rights.

The university acknowledges that the posts are not in agreement with the principles of the school but it does not violate any CSU rules or regulations. They wish they could take action, but they can’t because of the First Amendment.

But get this y’all. They want to use this racist act as a “powerful learning moment.” And this is why I said let’s cut the crap. Just stop. There is nothing more to learn or teach or understand. You know what you did was wrong and you did not care. You know that you would get away with it so you feel no remorse.

There is no reason to beat around the bush or pretend that racism is an old past time fairy tale that existed only during the Victorian era. It’s real, concrete, and very current.

One of the students came forward with an “apology” and an expression of her remorse. “Life lessons may not come from the best situations. My mistakes have hurt others and I deeply regret the pain that my ignorance has caused. I hope this incident can be used as an opportunity for dialogue and learning,” said Leana Kaplan.

How about this? How about you guys stop doing things to be sorry for. Don’t be sorry just be careful. You cannot sit here and tell me that all of the recent cases of black face that have happened within the last couple of years have gone unnoticed. This image could only be perceived one way, so again cut the crap. Thanks for the apology, but cut the crap.

Honestly the racist acts are not even what is upsetting. At this point it’s expected, especially with this country’s recent leadership. What is upsetting is the confused role that is played after the smoke clears. I am sick of the whole “I had no idea this would be taken this way” or “I never meant to offend anyone. It was just a joke” or the classic “I am sure they learned their lesson and their ignorance was punishment enough.”

YOU KNOW RIGHT FROM WRONG! You just never want to hold yourself accountable. Because let’s be honest, if the roles were reversed, I doubt the First Amendment would have even been a suitable argument for us.